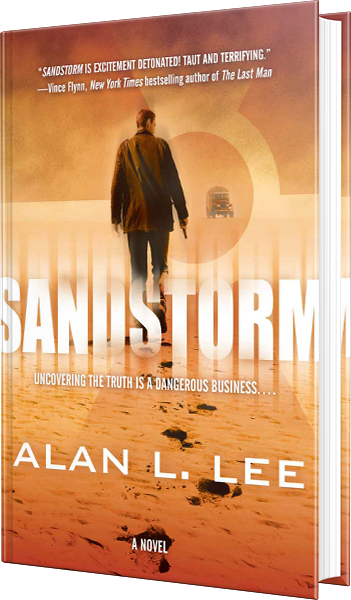 Sandstorm is a thrilling debut novel about an ex–CIA agent and a covert operation designed to derail Iran’s nuclear ambitions.

Lurking in the shadows, away from any government oversight, a secret partnership has been formed between an Israeli spymaster pulling the strings of the most efficient killing machine the Mossad has to offer and an exclusive billionaire boys club that wants to dictate the New World Order. In their pocket is a powerful U.S. senator who aspires to the presidency. Success means vast wealth and increased power, and they’ll stop at nothing to succeed.

CIA operative Nora Mossa is trained to kill when the situation calls for it. She’s also capable of disappearing into thin air. Being efficient, deadly, and beautiful, however, won’t be enough to protect her after her mentor Erica Janway is assassinated. Suspecting she might be next, Nora flees, turning to the only person she can trust—her former lover ex-CIA operative Alex Koves. That is, if he will even speak to her.

With danger lurking in every corner of the globe, Koves and Nora must stay alive long enough to piece together the clues to a deadly plot capable of killing thousands in the Middle East. And the clock is ticking….

Lee gets his book going a hundred miles an hour with his hair on fire and barely ever slows down.
—Elmore Leonard, NYT bestselling author
Lee’s debut thriller drops us into the kill zone of possibilities lurking behind real headlines.
—Vince Flynn, NYT bestselling author
Death, mayhem, murder, Mossad, nukes, maniac billionaires set on world domination, double-and (of course) triple-crosses, Sandstorm has all the muscle-power of its title.
—Brad Meltzer, NYT bestselling author
The character development here is first-rate, and the story line is intense. What could easily have been just another conspiracy thriller feels fresh and new in the capable hands of first-novelist Lee.
—Booklist

You better hold on to the debut novel written by Alan L. Lee and published by Forge Books with both hands, because Sandstorm is startling and fast paced. From the first page to the very last, the action never stops and the unexpected twists never quite seem to straighten out.

Nora Mossa finds herself running for her life after receiving a package of puzzling information from a friend who happens to be a fellow operative of the CIA. Well, her friend “was” with the CIA until she was brutally murdered. After going into hiding, Nora turns to ex-CIA agent Alex Koves for help. The two shared a romantic past filled with tragedy, and now they will rely on each other again—if there is to be a future. As the clues pile up and the international corruption unfolds, knowing you can trust and whom you can’t will mean the difference between life and death.

There are two major points that pushes this book to stand out from the plethora of action novels on the market today; a complex and believable plot and a distinct focus on character development. Though this is the basic crux of any good fiction and you’d think essential to success, these are also two traits in literature that new authors seem to have all but forgotten lately. Even some of the more established authors have let this slip away to rely on marketing and past sales to get them by. But this does not falter Lee. Sandstorm is a literal clinic on how the genre should be done.

As a talented broadcast journalist who anchors the morning news for FOX Broadcasting in Detroit, Lee has an obvious inside track on what makes this world tick. Well versed in the political climate and an eye for detail, this story could be pulled directly from today’s headlines. Lee’s insightfulness thrusts the reader is right past the “what-if” prospect of the plot and slapped with the frighteningly “when will this happen” scenario.

Archetypical characters often inhibit good storylines, persuading many readers to instinctively link them to previous works. We are not going to care about characters if too many have already been there, done that. Lee has apparently taken this aspect to note. At first glance, the characters in Sandstorm might be familiar or overdone like unbeatable heroes, terrorists from the Middle East or our own government officials who have gone bad. But Lee has allowed every character in Sandstorm to shine with his or her own individual stories. This method not only brings the element of believability to the characters, it also draws the reader into a relationship with the characters. In a story where the morality of the good guys and is blurred, character motivation is essential. We may not like what some people do, but we see what motivates them.

From believable characters to an intense, action packed story, Sandstorm by Alan L. Lee is a debut novel that reads more like the product of a veteran author. The book’s tidy conclusion leaves just enough open in the end to give the reader hope that more thrills may follow. Welcome to the book shelves Mr. Lee, you’ve bypassed rookie status and jumped right into the big leagues.

Alan Lee, the genial, avuncular morning anchor on Detroit’s Fox 2, recently discovered he’s had a nickname for some time. “My wife says she knows people—some of whom [have even] been interns at the station—who call me ‘School Closer,’ ” he says. “They grew up watching me, hoping I would announce their schools [were] closed in the winter.”

This month, however, Lee can boast a new title — one that he undoubtedly prefers: published author.

Sandstorm, the debut novel from “Alan L. Lee” (he’s all literary now), is set for release on June 4 by Forge Books, an imprint of renowned publishing house Macmillan. An international tale of espionage, corruption, and political intrigue — with no mention of Detroit anywhere in its 320 pages — the spy thriller took a full five years of research and writing. That’s especially daunting for someone whose regular workday begins at 3 a.m., but Lee suspects he’d been working on this project far longer than that.

“Back when I was a little kid, I was reading books I probably shouldn’t have been reading at [that] age,” says Lee, who’s been at Fox 2 since 1996. “I had two older brothers, so I read all the James Bond books, a series called Nick Carter-Killmaster, [fictional CIA agent] Sam Durell. I was reading all that stuff growing up, just fascinated by it all.”

After completing his manuscript, it took Lee another year to land an agent before finding a champion for his work in Washington-based literary manager Sharlene Martin. “Sandstorm is a stunning piece of writing,” Martin says. “I look forward to working with Alan on the sequels. He’s got a great future as an author.”

Set against the backdrop of a real-life operation in which the United States and Israel conspired to thwart Iran from building up its nuclear capabilities, Sandstorm weaves in an Israeli spymaster who controls the Mossad’s most lethal assassin, partnered with a cabal of ruthless billionaires who view the scheme as an opportunity to shift the New World Order in their favor. To hedge their bet, the big-money boys have a powerful U.S. senator with ambitions to occupy the White House deep in their well-lined pockets.

On the good-guys side, we have Nora Mossa, a deadly efficient CIA operative whose self-assurance is shaken when her mentor is found murdered at home. Unable to trust anyone at the agency, Mossa turns to the only person she feels she can trust — her ex-lover and former CIA agent Alex Koves, who wants nothing to do with her. Soon the hunt for her mentor’s killer and the billionaire boys club stratagem with the Mossad mauler eventually meld into a single storyline.

Koves, a debonair former spy who’s also a retired NFL player (think Pat Tillman), is the novel’s protagonist. So does Lee see himself in Sandstorm’s leading man? “Only in my fantasy world,” he says, laughing. “This guy’s good-looking, in shape, got hair, so, no. I wish.”