MY BRUSH WITH JASON BOURNE 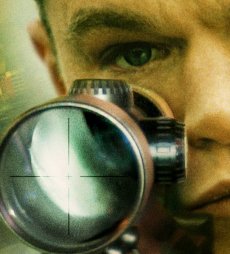 It was not unlike a clandestine meeting.

On each end, someone else was responsible for us getting together in 1983. There was never any direct communication. No one with notoriety passed through St. Thomas without a set of eyes upon them.

I had only been living and working on St. Thomas for a couple of months when a fellow co-worker at the Virgin Islands Daily News informed me that my favorite author, Robert Ludlum, often vacationed there. I told him I’d be interested in doing an interview. He knew people who knew Ludlum and therefore, he’d see what he could do the next time Jason Bourne’s creator was on the island.

I’d forgotten about the conversation when out of the blue one day, I was told Ludlum agreed to the interview. But, there was a condition. Now this was the part that as a journalist, makes you take a seat. 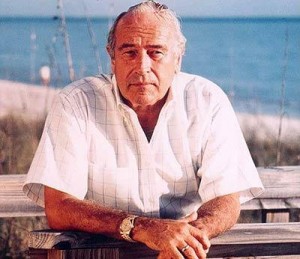 “You can’t disclose to anyone where he’s staying and you can’t run the interview in the paper until he’s gone.”

Now, this was the part that as a journalist, makes you jump out of your seat and say, “Is that all? Yeah I agree to that.”

A couple of days later, anxious as hell, I knocked on the designated door at the Secret Harbour Beach Resort. Now the next part is a little fuzzy in my memory. Come on, it was over 27 years ago! What I can’t remember is whether he or his wife opened the door. In any event, I was welcomed in and led to the patio. The backdrop was a breathtaking stretch of white sandy beach and a cove that fed into the Caribbean Ocean. 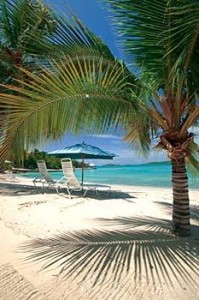 For nearly an hour I sat with Ludlum, picking his brain, listening to every word, hoping to not only gather material for a good article, but to possibly pick up pointers for the day when I got serious about writing my own thrillers.

One skill you learn over time is how to read upside down. While on vacation, Ludlum would often write passages of his next project in a simple spiral bound notebook. There it was, open on the table. The makings of the next novel. I started to read it. Hey, he left it open! I asked to be sure. “So, you’re working on your next book?”

He acknowledged my observation but wouldn’t let me read it. Now was that being hospitable! I believe that notebook turned out to be The Aquitaine Progression.

When I was done, it was just as much a treat to discover Ludlum was a gracious, nice person. I of course, honored our agreement and a few months later, a note addressed to me arrived from him. He didn’t have to, but essentially Ludlum took the time to say thanks. I cherish that correspondence to this day. 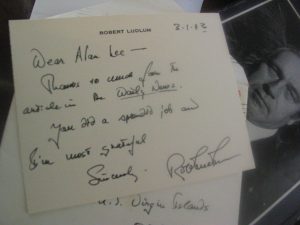