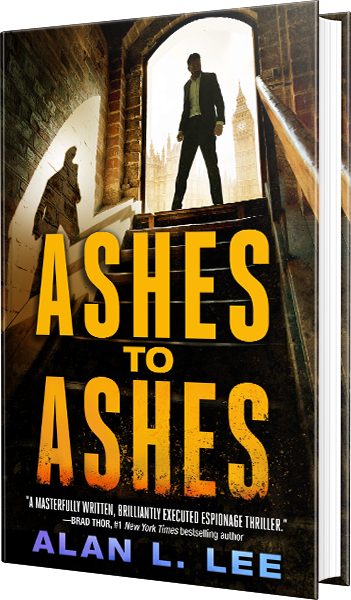 They call him The Devil.

Dead-set on settling an old score with a sworn enemy, Alex Koves is AWOL and on the hunt. As a once-rising CIA star, he’s forced to take matters into his own hands to protect both himself and his lover Nora Mossa—but to do this, he’ll need to place his trust in an elusive Russian woman who could sell him out at any moment.

More myth than man, the Mossad operative Nathan Yadin is known to his fellow countrymen and the Arab Underworld only as The Devil. After stumbling upon a sinister operation to sabotage a key nuclear treaty—and a plot to kill Alex and Nora for their meddling with Iran—he’s forced to put aside his dream of disappearing forever to once again jump into a world of conspiracy, murder and secrets.

With a target painted on their backs and racing against time to find a dangerous assassin who has never failed a single assignment, Alex and Nora must decide just how much they can trust Yadin… or if he’s using them as pawns in his own deadly game.

Get ready for a riveting spy thriller like no other. Filled to the brim with pulse-pounding action, thrilling escapades, and a whole lot of secrets, this exhilarating sequel to Sandstorm is a book you won’t want to miss.

A masterfully written, brilliantly executed espionage thriller. Alan L. Lee is one hell of a novelist and Ashes to Ashes is one of the best books you will read this year.
—Brad Thor, #1 New York Times bestselling author

Ashes To Ashes should come with a fire extinguisher. Alan L. Lee’s sequel to Sandstorm is a first-rate espionage thriller that will have you turning page after page.
—Brad Meltzer, New York Times bestselling author
A high paced plot, full of mystery and intrigue, you will appreciate the increasing level of action throughout the book.
—Todd Wilkins, Best Thriller Books
This book kept me up all night and I have no regrets.
—Amazon reviewer
This is action storytelling of the highest form.
—Amazon reviewer
I love a great spy thriller and Lee does not disappoint.
—Amazon reviewer
Alan L. Lee can stand alongside such stalwarts in their field as Flynn, Baldacci, Thor, Meltzer and Coonts!
—Amazon reviewer

I will be placing Alan L. Lee’s name next to the two or three other authors whose books I buy immediately when they are released.
—Amazon reviewer

Ashes to Ashes is a streamlined thriller that is the perfect read for a long weekend. Including a high paced plot, full of mystery and intrigue, you will appreciate the increasing level of action throughout the book. The few momentary pauses in the danger come as a kindness, allowing the reader (and characters) to catch their breath.

When a mysterious man shows up at Nora Mossa’s table and informs her that she and her ex-lover are being targeted, she’s unsure of a lot of things… but not her next step. She must find Alex Koves. Unfortunately for her, the once-rising CIA star is AWOL and on the hunt to settle a score.

After stumbling upon a sinister operation to sabotage a key nuclear treaty—and a plot to kill Alex and Nora for their meddling with Iran, Mossad operative Nathan Yadin, known to his fellow countrymen as The Devil, is forced to put aside his dream of disappearing forever to once again jump into a world of conspiracy, murder and secrets.

This is the second book in this series and I certainly will be going to pick up a copy of Sandstorm to see what happened to put this amusing cast of characters into the predicaments they find themselves in.

The one word I could use to describe this book is… fun. It’s just fun. Light on details in all the right places and heavy on action where it should be. There are no lengthy diatribes or bogged down over explanations of any kind. It’s an entertaining read that any espionage fan should pick up immediately.

There was an eight-year gap between Alan Lee’s first and second novels. But there’s a good reason why.

Life got in the way, the former Fox 2 Detroit news anchor explains.

After the publication of 2013’s Sandstorm—which introduced ex-CIA operative Alex Koves—Lee and Sean Quisenberry Lee, his wife of 26 years, moved from Franklin to Orange County, Calif. Their eldest son went to the University of Southern California, and their youngest son began high school. Lee, a Chicago native and Purdue University alumnus who once played semi-professional baseball, trained his youngest, who tried out for the freshman baseball team (which he made) before researching and writing Ashes to Ashes.

“It won’t be eight years before the next one comes out, I guarantee you that one!” Lee promises with a laugh.

In Ashes to Ashes, Mossad agent Nathan Yadin—alias The Devil—learns of an operation to sabotage a key nuclear treaty, along with a plot to kill Koves and his ex-lover, Nora Mossa, a CIA operative. Alex and Nora must form an uneasy alliance with The Devil as they face a ruthless assassin named Erik Snow, who’s never failed a single mission.

“Sandstorm left a lot of questions unanswered,” Lee says. “I kept hearing from readers over the years: ‘What happens next?’ ‘I can’t wait for the next one.’ ‘We have to find out what happens to Alex’ … I felt before I could even move on to another standalone story involving Alex, I had to wrap up everything in Sandstorm that was left open.”

At the same time, Lee had to come up with a totally new story to move the characters forward. The Devil, who also debuted in Sandstorm, was an integral part of the book.

“He and Alex play well off each other,” he says. “There’s that tension between Nora and him, where she doesn’t understand why Alex protects him so much and believes him until she actually finds out why. … I find him to be an intriguing character for his skill level and the amount of respect he commands not only in Mossad but around the world in the people who actually believe that he exists or just the myth of him.”

Snow, who has a relationship with a woman from Southfield, gives Ashes to Ashes a Michigan connection.

“I felt he was necessary to give Alex something else to worry about,” Lee says. “I thought Snow was an integral part of the book, from what he was trying to accomplish. It was a good way to also include a character from Michigan and the circumstances surrounding her life situation, which I thought was an interesting tale to tell, and how she got involved and how you can overlook certain things about people.”

Lee is working on a third novel, as well as talking to Hollywood producers about adapting Sandstorm for a movie or TV series. While Lee never directly states it, Alex is Caucasian, but he has no preference as to who should play him onscreen.

“It’s hard to identify any particular actor out there you’d think who might be perfect,” he says. “If we ever get to that point, we’ll identify some people. It’s a complex role because you have to be physical—which most action heroes are—because Alex’s background is sports, and he was a very good athlete. Finding an actor who can play sports as well is sometimes not the easiest thing in the world.”

Being on the Pacific coast, so far from Michigan, makes Lee nostalgic for friends in Michigan.

“People tell me how much they miss seeing me on TV,” he says. “I want them to know how much they mean to me. I certainly miss all of the Michigan people; they’re wonderful people to be around.”