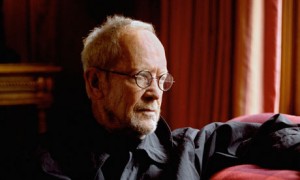 He began his illustrious career in the early 1950s with a slew of successful westerns.  Working for an advertising agency in Detroit, Leonard would rise to write from 5AM-7AM before heading off to his copy editing duties at Campbell-Ewald.  He wrote every day, and once he quit advertising, it accelerated to 10AM to 6PM without a break.

What resulted from his relentless dedication was a writing career that most of us frankly can’t even dream about.  “Get Shorty” “3:10 To Yuma” “Out Of Sight” and “Hombre” are just a few of the titles he penned.

I interviewed Leonard on TV a number of occasions.  He was a quiet, always seemingly pleased with his station in life kind of guy.  I recall one time poking fun at him for the car he drove to the station.  If memory serves me right, it was a vintage Volkswagen hatchback.  He laughed and in typical Leonard fashion, responded by saying it was “practical” and “not over the top.”  It got him to where he needed to go.

I felt like a member of the club when Leonard told me to simply call him “Dutch.”  Growing up I read a few of his westerns and became even a bigger fan when the likes of “Hombre” “Valdez Is Coming” and “3:10 To Yuma” made it to the big screen.  Then came crime fiction for which he either wrote the book or the screenplay.  There were no limits to Dutch’s talent.  He had a playful, special relationship with words.

Now that I’m a published author, one of the blurbs that appears on Sandstorm is from Dutch.  It was one of the most nervous calls I’ve ever made, asking him would he do it.  After all, Dutch only knew me as a TV news anchor.  I also realized he didn’t do it very often.  Dutch made me laugh when he said, “I’ll look at your manuscript.  Now if I don’t like it, I won’t give you a blurb.”

I told I’m I’d expect nothing less than the truth and that I’d understand if he decided not to offer a blurb.  A few weeks later, my editor at Forge called and said they’d received an endorsement from Elmore Leonard.  It wasn’t my birthday, but it sure as hell was quite a present.

Born in New Orleans, Dutch made Metro Detroit his official home.  Once he got a taste, he was a lifer.  He picked up the area’s mood, its heart, its dialogue, and often transported it onto the written page.

While those of us who write genre fiction open ourselves to criticism because we aren’t perfect, Elmore Leonard was a talent to be taken seriously.  He was a student of the written word.  His prose was a force field.

If you’ve never read a Leonard novel, or strive to be a novelist, do yourself a favor and find the time to reward yourself with one of his many titles.

One thing is for certain.

His light will never fade.